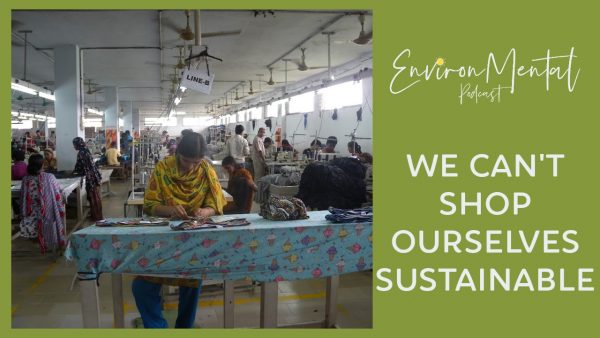 This week on our sustainability podcast, we’re still covering Fast Fashion – and it feels like we’re getting to the nuts and bolts of the problem: fashion manufacturing.

When we spoke about fabric, that seemed to have a sustainable solution that a consumer can choose – great – this week… not so much.

This week Courtney covered the social aspects of the manufacturing of today’s fashion.

The long and short of it this: sweatshops are still a real – and common – thing.

And – as if that fact isn’t enough – for every tailor working in a factory, there are several employed in homes, workshops or backyards. Around 80 percent of the workers are informal — mostly migrants, some of them trafficked, hired and fired as orders are commissioned and completed, divvied out by brokers, paid a few cents for each piece of clothing they deliver.

One Example of the Fashion Manufacturing Problem

We (the consumer, and often the business owner) are purposefully distanced from the way our clothes are made.

In 2012, the Tazreen garment factory fire killed at least 112 people and injured hundreds more. This fire broke out because they were making clothes in an unsafe environment. What brand were they making clothing for? Wal-Mart.

So here’s the thing. Wal-Mart never actually placed an order with Tazreen. In fact, over a year before the fire, Wal-Mart inspected the factory and discovered that it was unsafe. By the time of the fire, it had banned its suppliers from using it!

So how did its products end up at Tazreen anyway?

Wal-Mart hired a megasupplier called Success Apparel to fill an order for shorts. Success hired another company, Simco, to carry out the work. Simco—without telling Success, much less Wal-Mart—sub-contracted 7 percent of the order to Tazreen’s parent company, the Tuba Group, which then assigned it to Tazreen. Two other sub- (or sub-sub-sub-) contractors also placed Wal-Mart orders at Tazreen, also without telling the company.

If Wal-Mart doesn’t even have transparency into their fashion manufacturing practices, how can we expect small businesses to navigate this supply chain?

What Should We Do?

We’ve seen it time and again. Companies (any entity, really) put in charge of auditing their own behavior won’t result in significant changes. The solution for the social injustices within fashion manufacturing has to rely on international worker’s rights movements and labor laws.

Until we see huge changes in the labor laws around the world, we highly recommend purchasing from businesses that share information about exactly who makes your clothing and where.